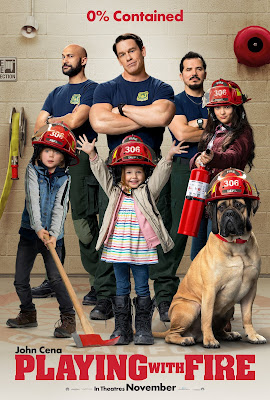 I am always up to go see a new family friendly comedy, so when we were invited to see an early showing of the movie "Playing With Fire" we couldn't refuse. The preview for this movie is pretty cute, and the cast has several people I recognize which made me want to see the film. The lead cast is John Cena, John Leguizamo and Keegan-Micheal Key plus it also features Judy Greer.

The premise of this movie is that a fire superintendent (John Cena) and is crew rescue three siblings from their burning home, dealing with fires is almost an everyday thing for them, but what they were not prepared for was babysitting! As you can imagine it leads to a bit of a crazy adventure.

My thoughts on this movie:

The film starts off with an action packed scene as you watch the crew work to stop a fire from spreading, which gives you a good look at what they do on a daily basis and how they work as a crew together. There is a laugh or two prior to the children being rescued, but the real laughs start once the children and crew are together at the depot.

I thought all three of the kids they cast did a fantastic job, and I didn't realize the entire time I was watching the film that the oldest girl plays an X-men in Deadpool! She looks so different. Both of the younger children do quite a few silly and hilarious things during the movie some of which give you that "Oh no!" laugh seeing someone stuck in a situation, that you know you wouldn't want to be stuck in. There was a scene or two that seemed a bit cheesy, but I think most movies have parts that are like that. A little romance and heart felt scenes are also thrown in along with the comedy which helped give the film a wholesome feel. I personally don't re-call seeing anything that stood out to me as being non-child friendly, or anything that made me upset, it is definitely a film we all want to watch again.

As you can see there is an adorable dog in the promo as well! The kids really loved seeing her on the screen, she stole the screen along with one of the other crew members (Axe) that the kids talked about all afternoon after seeing the movie. It is hard to pick a favorite character or scene in the movie because there are so many great scenes, you can't pick just one! This movie is great for families or even just to watch by yourself. You'll be laughing the entire time and you will feel connected with the characters by the end. My husband sadly didn't attend with us as he had a project to work on, but after I told him about the movie and the kids excitedly told him about the movie as well, we plan on buying it once it comes out.

Want to watch the movie preview?

Disclaimer- Tickets to see the movie mentioned above were provided by Allied Global Marketing for the review free of charge no other compensation was provided. However, no product compensation will influence the outcome of any review. My honest opinions are used in all reviews, they are solely my own & they may vary from others.My reviews are posted for readers in order to provide an informed decision before seeing the movie.
Posted by Burning Moon at 8:30 PM