Bodies Revealed is at OdySea in the Desert!

**This was not a paid post. My husband and I were invited to a media preview night to check this exhibit out before it opened to the public we attended free of charge provided by Bridges Media PR. however my honest opinions were used. The opinions expressed below are solely my own & they may vary from others.** 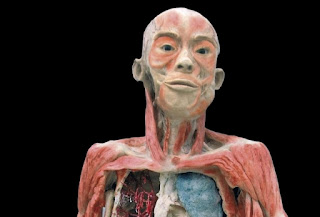 I wanted to note this review won't have as many photos as my reviews normally do, this exhibit does not allow photography inside of the exhibit and yes that included those who were there for the media night so the image above I pulled from the stock of Bodies Revealed photos on google.

Everything you see at Bodies Revealed is real, every last body, organ, heart, etc is real. It takes the team behind Bodies Revealed one week to one year to get each specimen ready for show. They have so many different things to see it was unbelievable some of the ways they were able to display the specimens to show how everything lays in the body. There were a few things that might make a few people feel a little uneasy otherwise everything is pretty fascinating seeing exactly how many different working and moving parts you have inside of you.

The exhibit was significantly larger than I thought it was going to be, it seemed to go on for quite some time and they had everything spaced out well so you aren't running into people while trying to take in everything. They also have several organs and even brains that show cancer and other health related issues. I don't want to give away too much of the exhibit so I will leave it off here and tell you to go see what it is all about. Tickets are $19.95 per adult and $14.95 per child or you can buy combo tickets that include one of the other attractions located inside of OdySea in the Desert.

Labels: Arizona, Attractions, Exhibit, Review, Things to do in Arizona