Almost every room in my home has some kind of decoration on the walls aside from the kitchen and bathrooms. Our kids bathroom which doubles as the guest bathroom is a decent size and was fairly boring so I decided I wanted to pick a theme and decorate it.

There are a lot of cute bathroom decorations out there such as Mickey Mouse and Jungle theme but I wanted something different that we all enjoyed. What is the theme we decided on? We decided on Harry Potter!


My first step was to replace a towel fixture on our wall, the way it was added to the wall made it to where it was in an awkward spot and made our towels sit on top of the bathroom counter. Instead of keeping a second towel holder in this spot I moved the towel holder to the other side of the room and added a hand towel ring instead (paint is still wet in the photo). You can see in the "before" photos that we didn't have much on the wall in the form of décor. 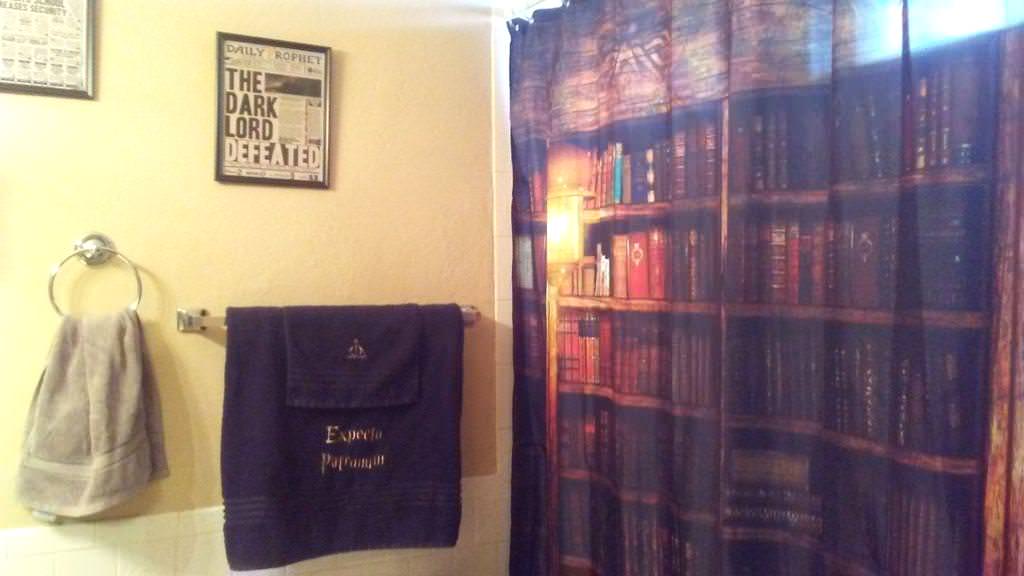 Next I wanted to find a shower curtain that would fit in with a Harry Potter theme, I checked on Etsy but couldn't find anything I liked. When searching on Amazon I found this magical shower curtain that features several shelves of books, a witches broom and a lamp post. It reminded me of Dumbledor's office, plus I love books and have always wanted a large library in my home so this curtain was a perfect fit. I looked on Amazon but can't find this exact shower curtain again but this shower curtain is very similar minus the broom.

We have another spot for towels to hang on the other side of the bathroom, so I decided to use the one above the toilet for decorative towels. I switch between two different Harry Potter themed towels and two Harry Potter themed hand towels when ever a set get dirty from the kids using them to dry their faces and hands (even though there is a hand towel right next to them). The towels are from Etsy shop MandaPandaBagsandMore  whom I've worked with on a review in the past.


For the wall I decided to hang up a few prints that are inspired by The Daily Prophet, I also found these on Etsy however I won't be linking to it as the shop owner ignored my messages with their giveaway winners information and ignored the winner as well.

I found the little shelf at the .99 cent store, although contrary to the name they do sell many things for more than a dollar. This shelf was $2.99 which is still a great steal and is the perfect size for the little figures I wanted to add to the shelf.

The Deathly Hallows wooden ornament was gifted to me and it has our wedding date on the back.

For the shelf I decided on several small figures that represent different parts of the wizarding world. I found the Newt Scamander's Case on amazon for $9, when you lift the lid of the brief case up small niffler hands pop out and it makes niffler sounds.

The Funko pop Niffler & Dobby were also found on amazon and the owl came out of a Harry Potter blind box that I was gifted and the dragon statue I've had for several years after my grandfather gifted it to me.

To tie in with the theme I added some decorations to the counter top as well. My husband bought the boho inspired candle holder on amazon for me as a Christmas gift (found here) which I put a false battery operated candle in. I placed a dragon my grandmother gifted me along with a purple candle I picked up from Walmart to match the dragon. Both the candle holder and the purple dragon light up which is relaxing to have on at night especially if you are soaking in a bubble bath with a bath bomb.


* Note: My bathroom is poorly lit, I will take some better photos soon and replace the photos on this post. I have provided links to where I found some of these items, but none of them are affiliate links I just wanted to share as I know some may ask where certain items came from.