**This was not a paid post. My honest opinions are used (both good and bad), they are solely my own & they may vary from others. I received four passes to the event for promotional purposes. It was provided by Disney On Ice & The Encore Agency for the review free of charge.** 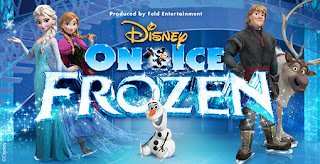 If you haven't been in attendance at a Disney On Ice performance then you are really missing out! I remember going to Disney On Ice once when I was younger, it was during a girl scout outing and it was a lot of fun. My kids have been to Disney Live and Disneyland but they've never been to Disney On Ice so when I was presented with a chance to promote the upcoming show in exchange for tickets to go I was all in. My son and husband weren't super interested in going because the theme was Frozen so we decided to turn it into a girls night! My SIL and my daughter's best friend joined her and I for the show. 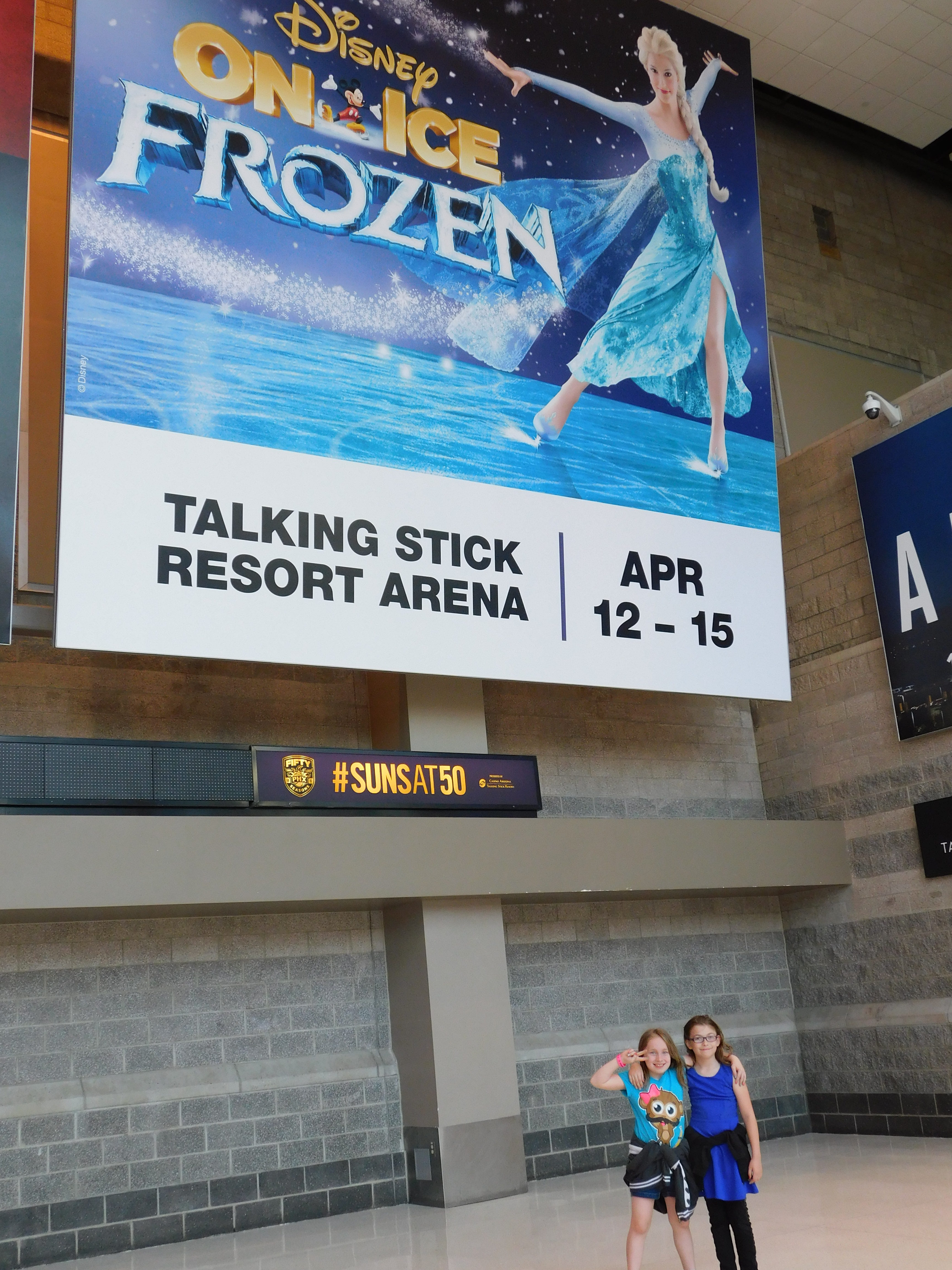 Like with most big events if you are wanting to eat at the show or purchase souvenirs be prepared to spend a decent amount such as $10 for a box of popcorn, though some of the treats are well worth the cost. We decided to eat before the show seeing as it started at 7pm, but we did pick up some pretzel bites and a drink to share. Seating was easy to get to and if you get lost they have plenty of staff at the venue to help direct you to the right place. 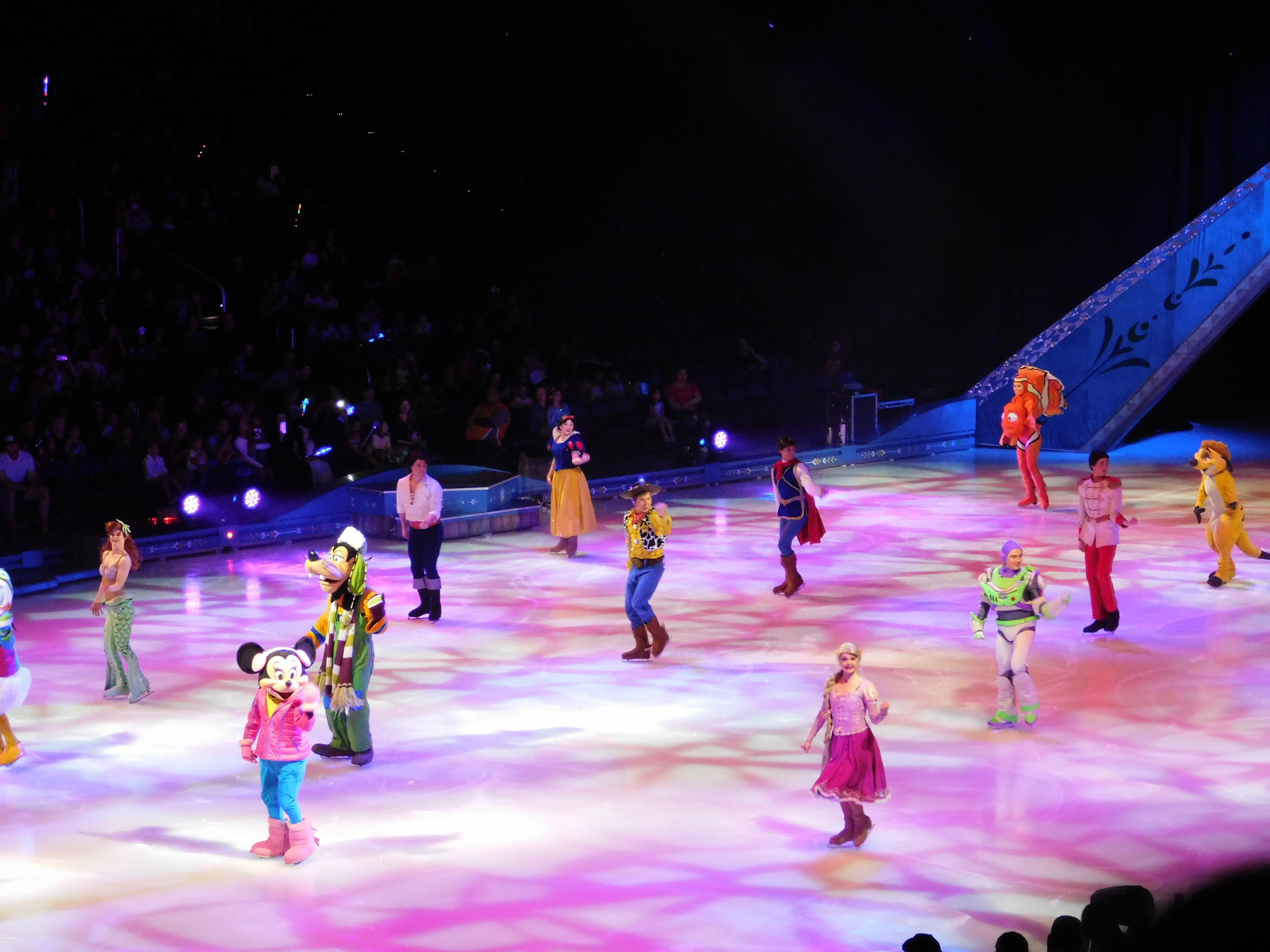 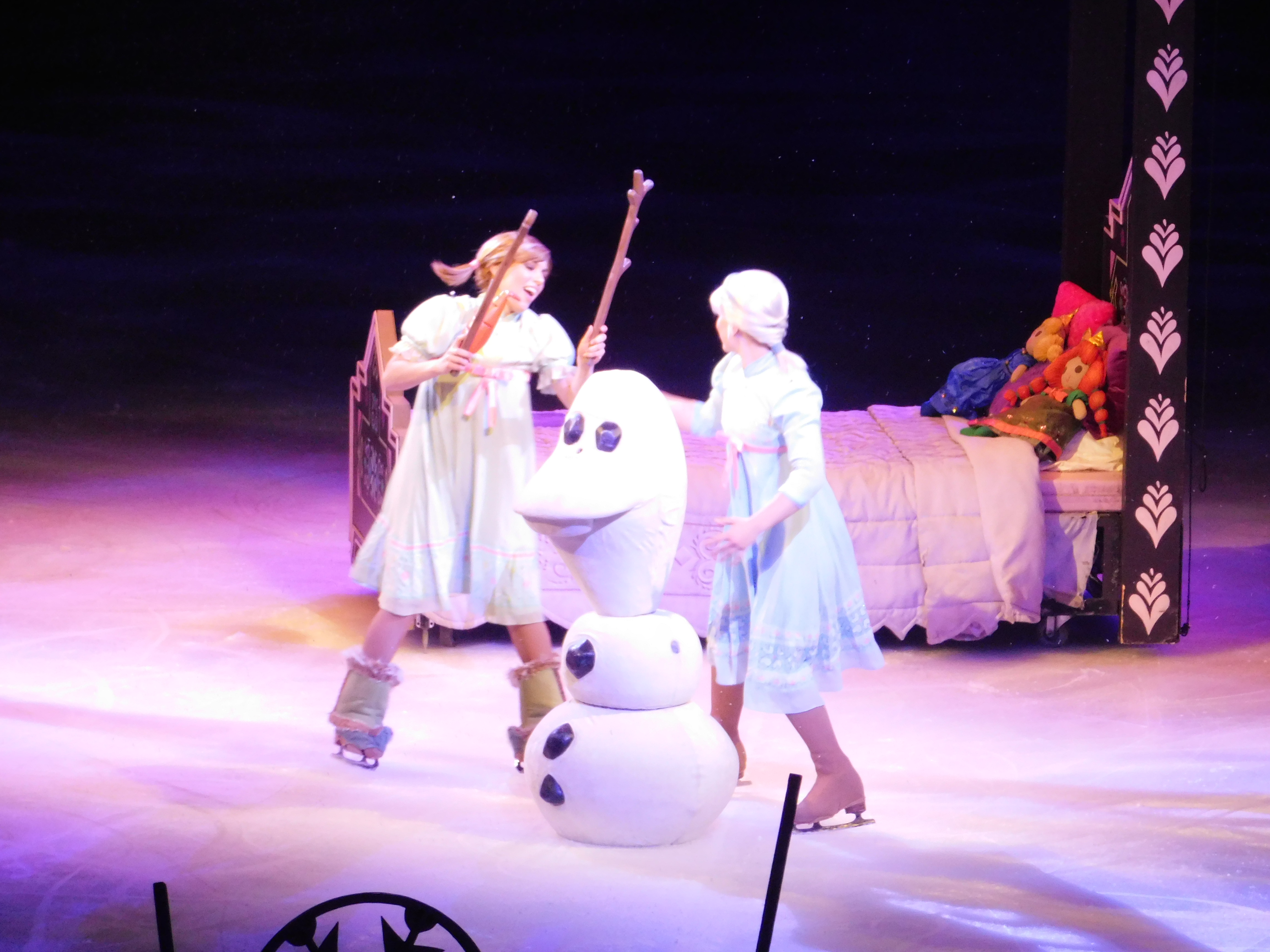 I have to admit when it comes to events like this I am a big emotional baby, as soon as the show started my eyes started to water and I felt like I was going to cry. Not because I was sad but because I was so excited and happy that my emotions just got the best of me. I was the same mess the first time we were able to visit Disneyland, I had never been there myself and I was so excited and amazed we were able to save up to take our kids there so I cried a lot during the day but happy tears. Before they jumped into the story of Frozen, Mickey, Minnie and Goofy came out to introduce a number of Disney characters who all performed a dance together to kick off the ice show. I was extra impressed by the performer in the Pumba costume because they were ice skating on all fours! (Baby Sven was also on all fours). 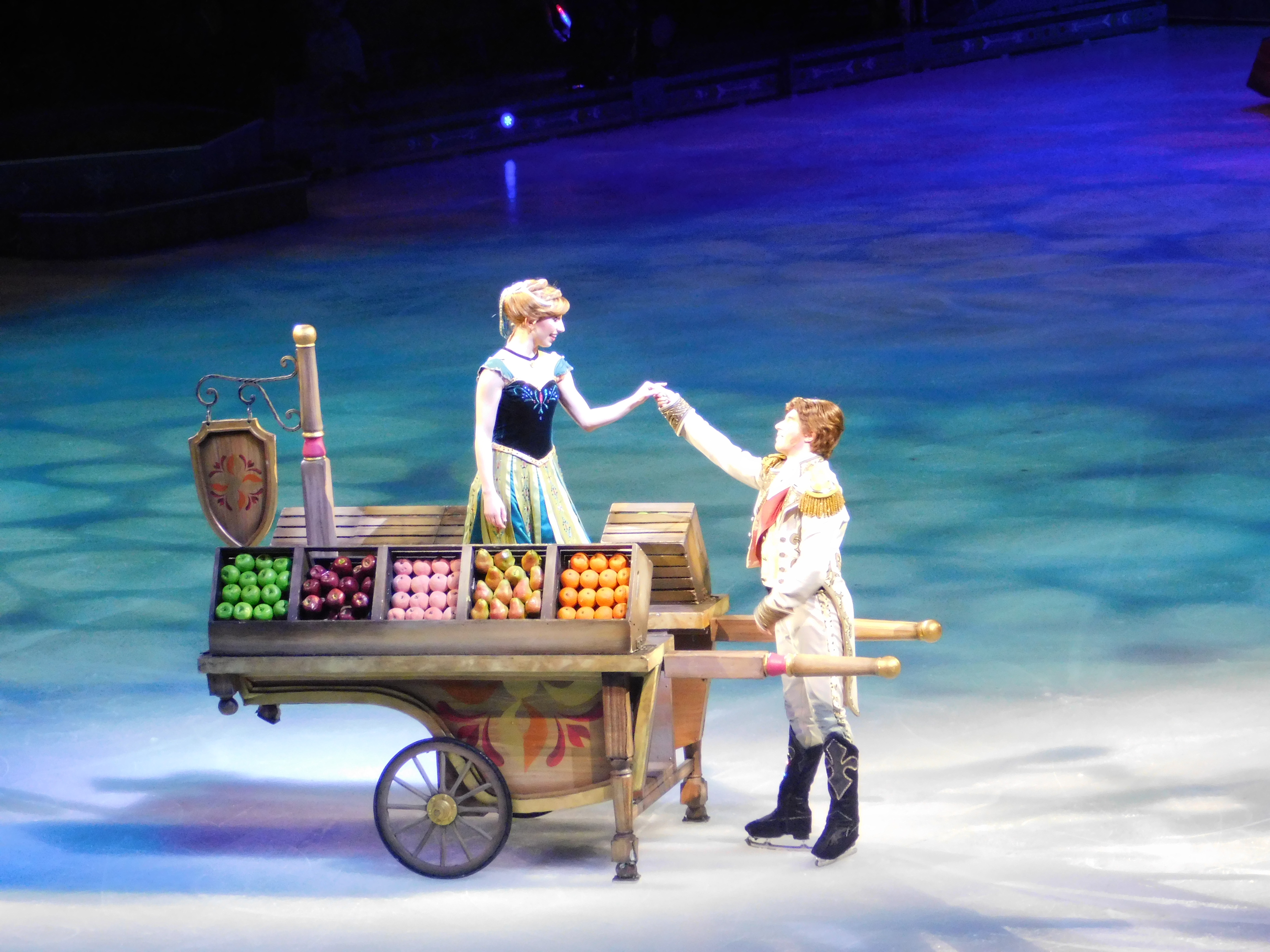 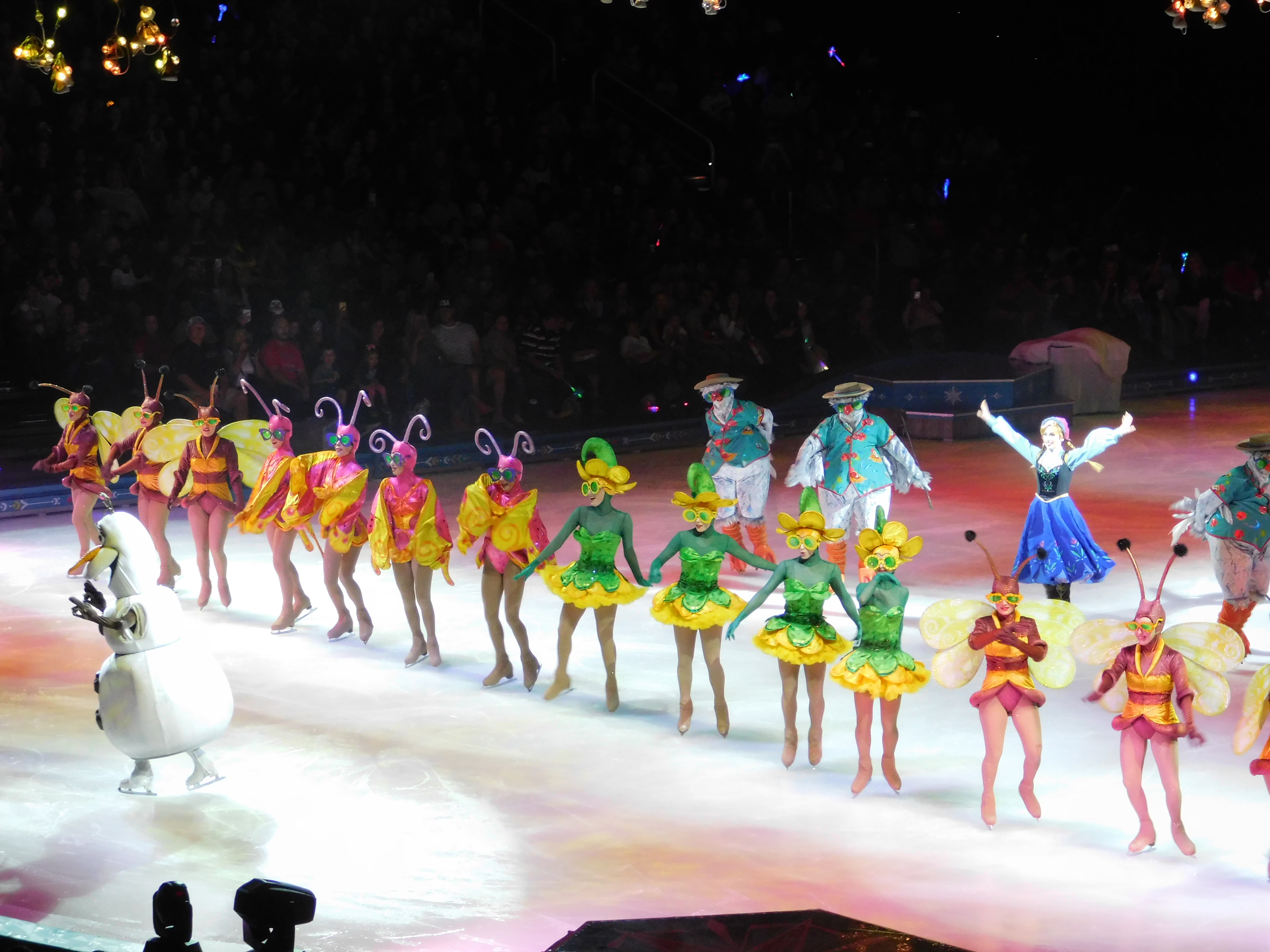 The show was a lot of fun, there were so many performers all skating at once it was amazing to see how well choreographed they all were. I was amazed at the size of some of the costumes and the fact that they had so many pieces of the show that were remotely controlled from off stage, I honestly would be a little frightened about being on top of a stair case being controlled by someone via a controller. Everyone worked so well together to keep the story flowing, keep the crowed entertained and make sure everyone was safe from tripping over props. The crew really has everything down to a tee to keep the audience focused on a certain area of the stage so they can set up the other area like sneaky ninjas. 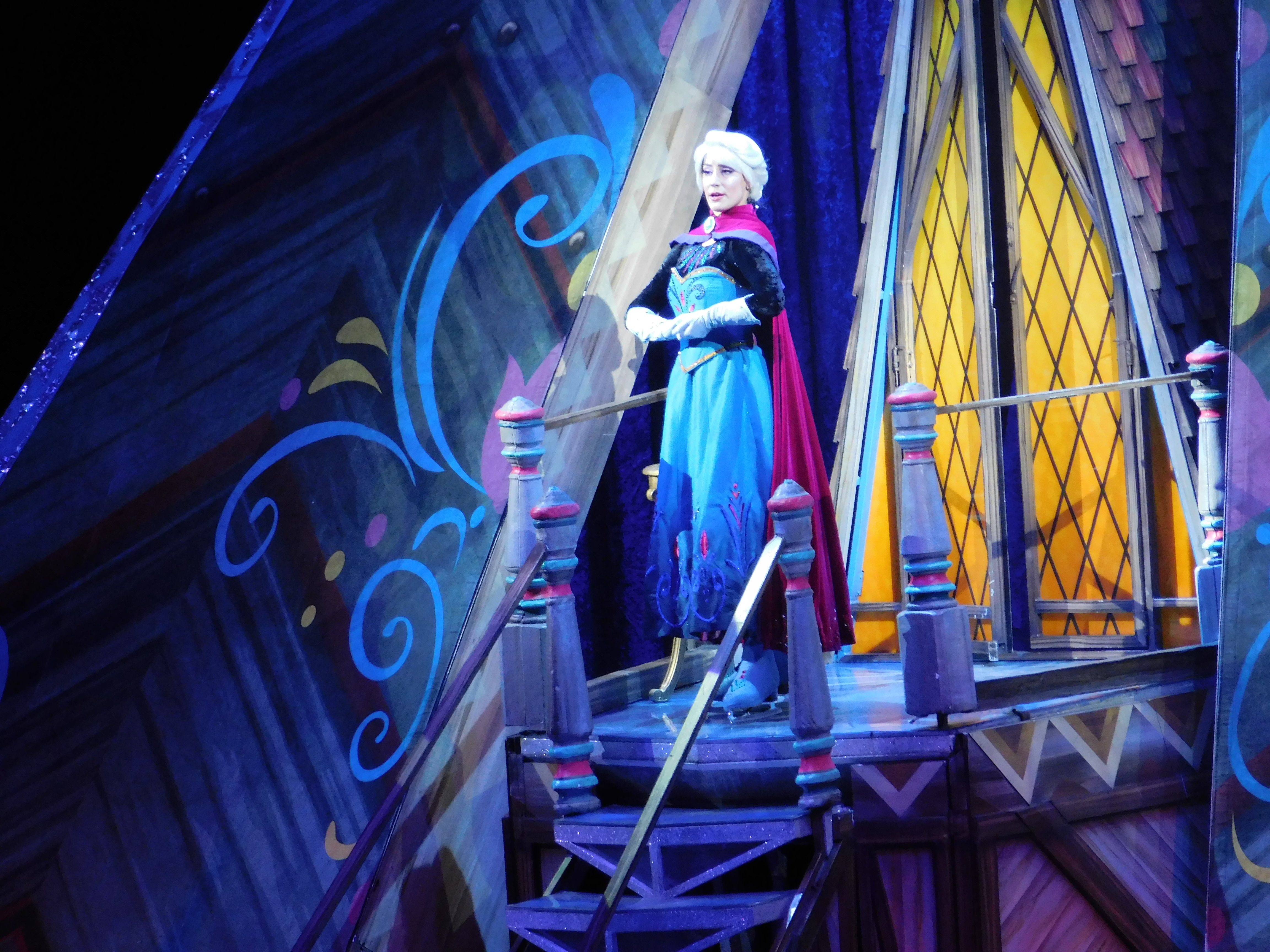 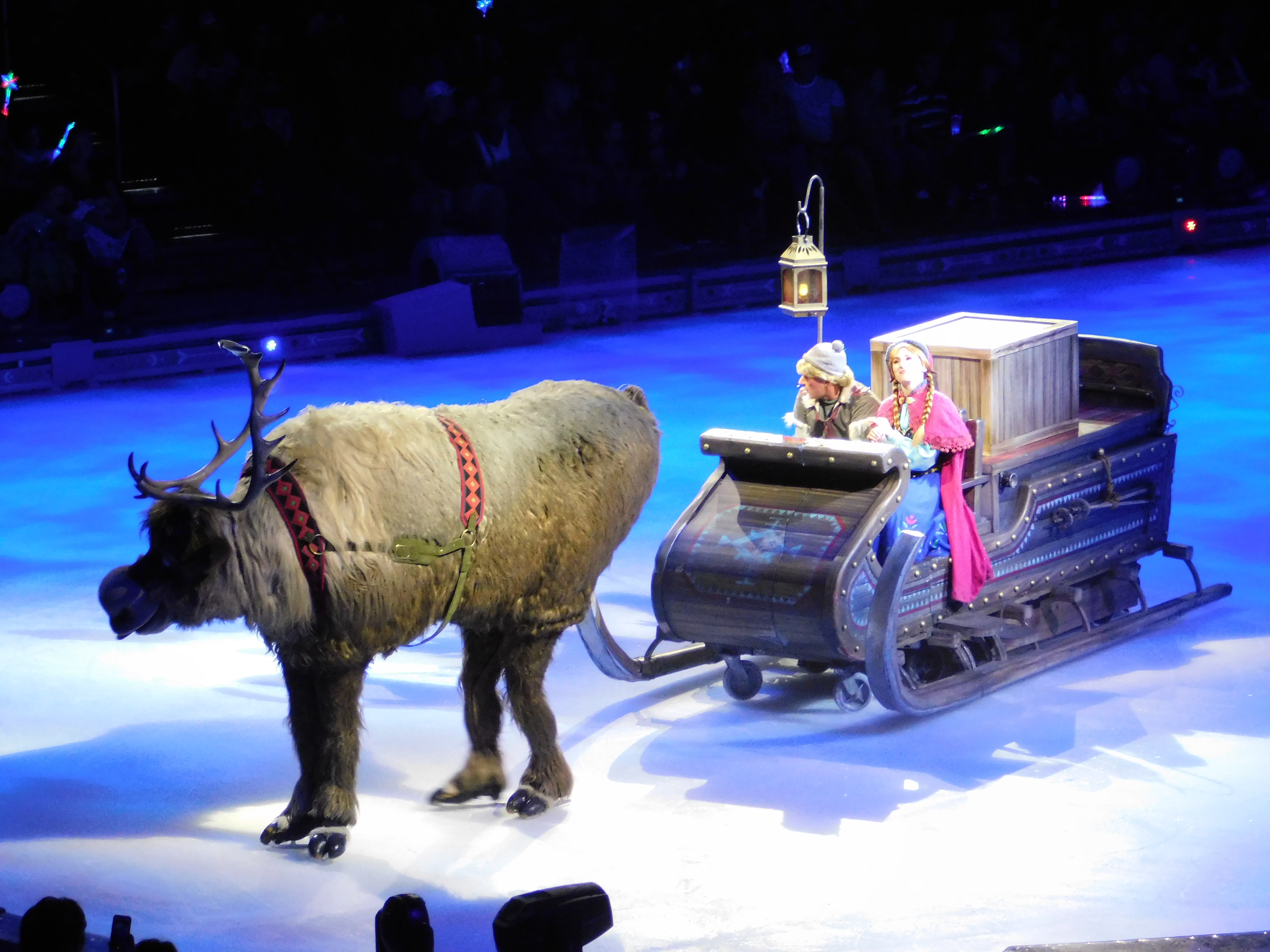 Along side graceful ice skating, gorgeous costumes (Disney does such an amazing job!) and fun sing along songs they also included some surprise firework like explosions when Elsa uses her magic, fun lighting and a blow up monster that was a lot of fun to see. They perform the movie in two segments giving you a break in between to use the bathroom, get a soda refill or just stretch your legs which was nice because of how restless kids can be. All in all we had a great time and the girls had a blast they are sure to remember for sometime. 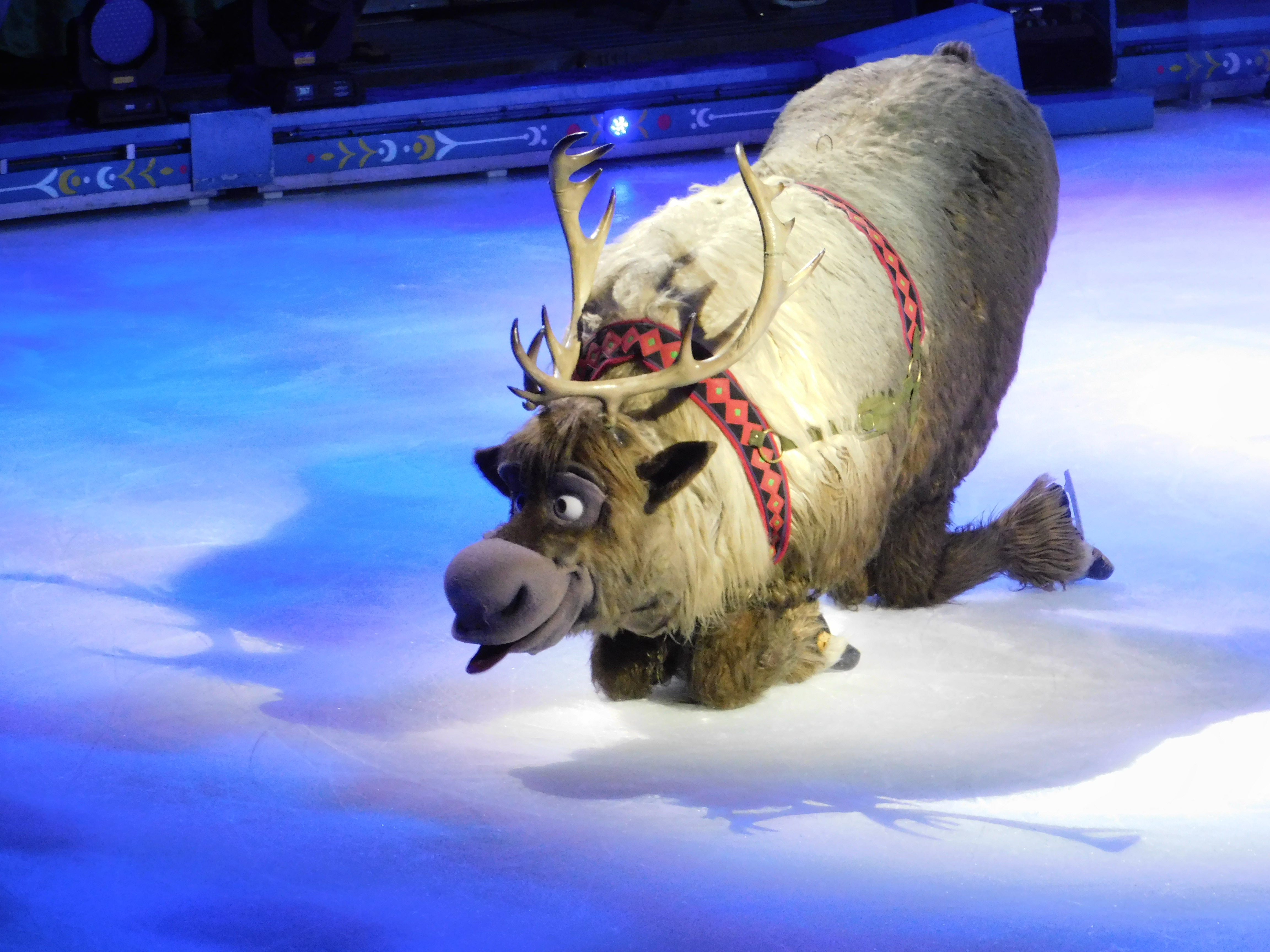 My favorite part of the show was when Olaf started singing about summer because a variety of performers came out dressed as different summer themed things like bees and flowers. I have now officially seen Frozen live at Disneyland and have watched it on Ice, but I still haven't seen the movie itself. The girls and I really enjoyed the costumes as well, I know Disney always puts a lot of effort into making their costumes look as similar to the movie costume as possible but it is mind blowing what their designers can do. Take Sven for example, this large costume piece could have turned out looking kind of creepy or just plain ugly but he is so adorable it makes you want to run up and hug him.

The practice and training the performers do really pays off and shows in the performances that they provide, instead of just watching the show they encourage you to sing/dance along and it helps make it feel like you are part of the show.  The next time Disney On Ice comes to your home town I highly suggest attending the show.
Posted by Burning Moon at 9:09 PM